Ledbury’s Town Trail has a long history. Starting out in 1847 as part of the Hereford and Gloucester Canal, in 1873 it was acquired by Great Western Railway. By 1885 it was part of the Ledbury to Gloucester branch line and remained so until its closure in 1964. In 1997 the old railway line was upgraded to the Town Trail.

Now classified as an ‘open space’ it has been sorely in need of some care for several years. It had long been an ambition of some of our supporters to carry out some conservation work on the Trail and maintain it as an asset for the town. With the forming of Sustainable Ledbury in July 2019 came the opportunity to plan to do something about this. A number of supporters formed a project group and by Spring 2020 had carried out a partial survey of the Trail. From this they drew up a proposed maintenance plan and went to the Town Council. The land is owned by Herefordshire Council and the next step was to request a Licence to Cultivate. This ensures that the conservation work can be carried out legally.

Progress was disrupted by the Covid pandemic but eventually, in Spring 2021, members of the project group walked the Trail with representatives of the Town Council and Herefordshire Council. This was a major step forward and gave the opportunity to define the extent and limitations of the work that our volunteers can carry out. By the autumn Sustainable Ledbury had formal agreement that we could start on the agreed work. In October 2021 we did just that.

It will take some time to clear some of the undergrowth, check what woodlands plants have survived being smothered and start some replanting where necessary. At the same time we need to thin some of the tree saplings, leaving some to take over from trees that are aging. The aim is to both increase biodiversity, improving the habitat for wildlife, and make the Trail more of an asset for the town. Initial response from residents has been very positive. 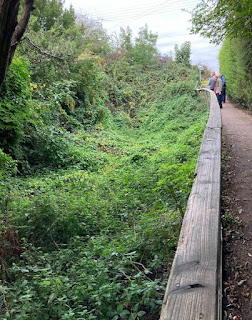 Events Sustainable Ledbury will be attending/active

Sustainable Ledbury Blog - see what we have been doing